A bird’s-eye-view of twenty years of broadband

The first ten years of the 21st century are behind us. The second decennium is already known as ‘The Roaring Twenties’ or ‘The Transition Twenties’. A period that’s all about big changes, both economically and socially. No matter by what name you call it, one thing is certain: 2020 marks the beginning of an ever bigger technological impact on humans, the environment and society. While there have been developments at a rapid pace during the past twenty years.

It’s hard to imagine, but twenty years ago, citizens, companies and the government were still relying on copper network connections for land and mobile voice and data communication. And at that time, it seemed like that was more than enough. Mobile communication was still geared to particularly voice and simple text messages through SMS services. Internet traffic – both by mobile phone and landline – could still be called reasonably modest, partly because of bandwidth-gobbling services, such as streaming via Netflix. And no one had ever heard of working with applications and data from the cloud. 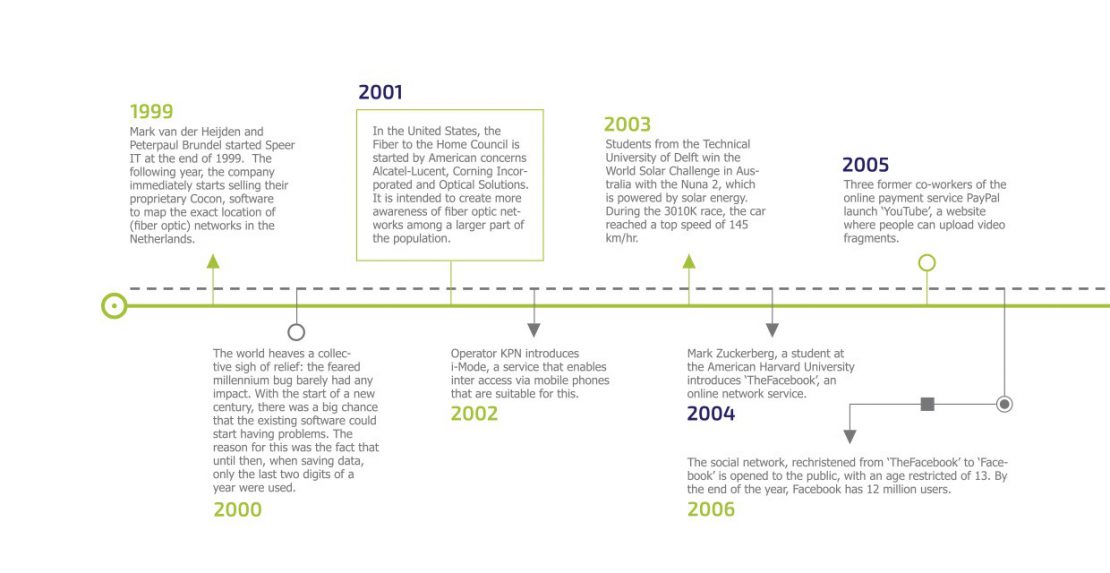 The need for faster internet connections was initially slow to start. It became attractive for (SME) companies and consumers to start using internet services that required more bandwidth, only after the introduction of ADSL around 2000. With the arrival of ADSL, it was goodbye to the ‘pay per minute online’ model. During the same year, the brand new Belgian/Dutch Eurofiber also installed the first fiber optic ring in the Randstad. The fiber optic infrastructure (about 500 km big) connected the cities of Amsterdam, The Hague, Rotterdam and Utrecht and is intended for the business market. At the time, sceptics believed that the company was acting way too soon: what kind of companies would need such fast connections anyway? History has proven them wrong by now.

Law of the handicap of a head start

The rollout of fiber optic networks has soared over the years. In the United States, that was boosted by the start of the Fiber to the Home Council (FttHC) in 2001. The founders – manufacturers of fiber optic equipment – wanted to increase the awareness of fiber optics among a wider audience. The FttHC spread its wings to other continents, including Europe, within a few years. The demand for fiber optic networks is initially not very big among consumers in the Netherlands. The law of the handicap of a head start seems to apply here. After all, the Dutch consumer already has ADSL and internet via cable. And those two, at that time, provide enough bandwidth to go on the internet. Some fiber optic initiatives start developing here and there, however.  In 2004, 2,000 households in Almere get the offer to get connected to fiber optics. Interest is a little disappointing at first: initially, only 76 households take up the offer. 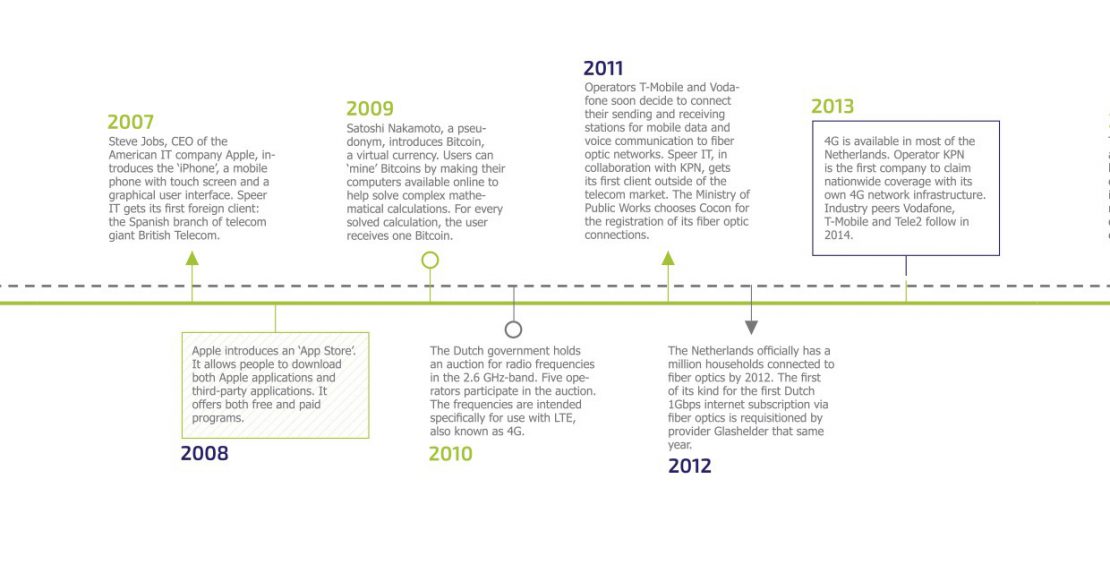 The year 2005 may be called a milestone in the history of fiber optics in the Netherlands. It was the year the first Dutch municipality was connected to a fiber optic network.  Nuenen in North Brabant got the first one. The Cooperation OnsNet Nuenen, where residents could participate through shares, rolled out a network for the municipality with fiber optic operator Reggefiber. Fifteen years later, the Nuenen fiber optic network is still at the basis of various innovative developments. The cooperation set up a test project in 2019, in which internet-connected sensors were used to allow seniors to live independently as long as possible.  2005 was also the year an important bandwidth-devouring service was started in the United States: video-streaming site YouTube. It turned out to be the catalyst for an unprecedented worldwide increase of bandwidth consumption.

Speer IT experienced the fast rise of bandwidth and the advancing fiber optics transition in the Netherlands from the beginning. Founders Mark van der Heijden and Peterpaul Brundel immediately got their first order when they started at the end of 1999.  They had to map out the copper network infrastructure controlled by software for operator KPN. That ultimately resulted in the software package Cocon. An application, which over the years, evolved into the ultimate database where the majority of the land and mobile network infrastructure is established – both above and below ground – Speer IT has literally been monitoring the growth of fiber optic networks in the Netherlands. 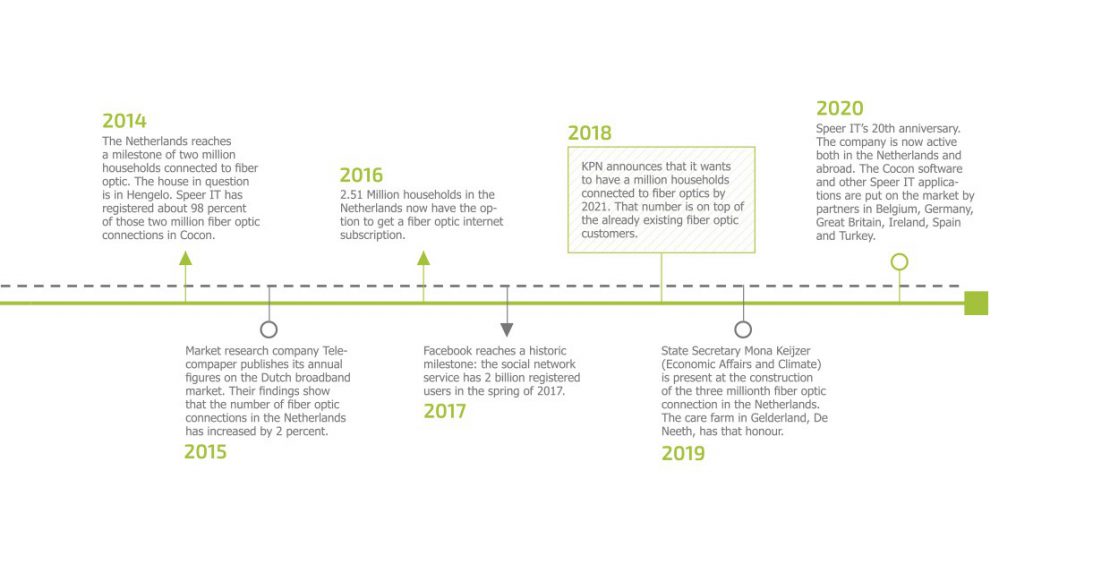 “No one really expected that the available bandwidth would grow so fast,” Peterpaul Brundel, of CFO Speer IT says. “And I’m not just talking about fiber optics, but also about coaxial cable. Ten years ago, a cable modem still reached a maximum speed of 10 Mbps. Currently, a cable modem reaches download speeds of up to 1 Gbps. That’s a hundred times faster.” He indicates that the growing need for bandwidth is led especially by consumers. “Streaming video services like Netflix and YouTube have contributed to this. And new bandwidth-requiring things like the smart speaker and other household appliances that are connected to the internet are constantly coming out. In the business market, there is a need for more bandwidth too, of course, prompted by things like data storage in the cloud and other forms of cloud–computing. But that does not compare to how much bandwidth is consumed privately. At Speer IT, for example, we are a bulk consumer, but until now, a connection with a maximum speed of 500 Mbps still suffices.”

Fiber optics is the future-resistant infrastructure

The expectation of market analysts and other experts is that the need for bandwidth is going to be exploding to such a degree in the coming years that the customary ways to provide internet access will no longer suffice. The copper and coaxiar cables will reach their technical limits by then. Fiber optics will then be the only option for satisfying that bandwidth hunger of consumers and organisations. Peterpaul Brundel: “Technically, fiber optics can be expanded to higher speeds with relative ease. It is a matter of replacing or changing equipment settings. You can quickly go up to 10 Gbps with a fiber optic network. A few years ago, it was already possible to reach a speed of 16 Terabits per second. And that limit is constantly being stretched up. Fiber optics is the most future-resistance networking infrastructure.”